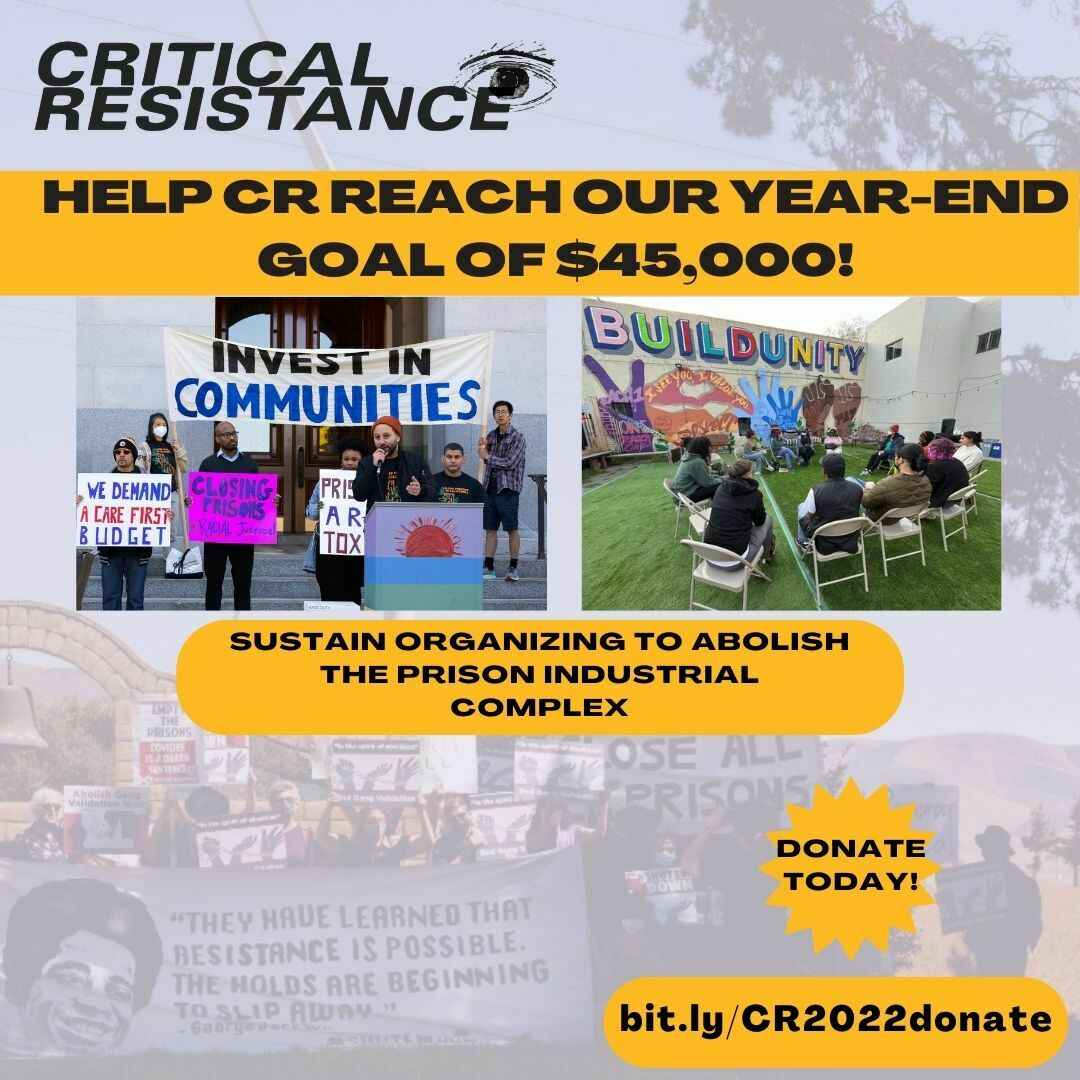 Every penny helps chip away at the prison industrial complex.

What Is Prison Abolition?

We must Imagine the World We Want. Prisons Cannot Solve Society’s Problems.

By some estimates it cost the United States One Trillion dollars a year. A trillion dollars, to break-up families, destroy lives, and has little to show in the way of rehabilitative effects—and yet this system is just a part of life? The prison-abolition movement calls for deep, structural reforms to how we handle and even think about crime in our country. Abolitionists believe that incarceration, in any form, harms society more than it helps. Our society has failed to address the root causes of poverty, addiction, homelessness, and mental-health crises. Criminalizing poverty through harsh fines and debt regulation; criminalizing addiction through drug laws; criminalizing homelessness by conducting sweeps of people sleeping in parks; and criminalizing mental illness by turning prisons into de facto psychiatric hospitals is all treating the symptom instead of the disease. This is one of the key differences between reform and abolitionism: The former deals with pain management and the latter with the actual source of the pain.

When we no longer call something a crime, we can respond differently, If a population stops thinking of vagrancy or sleeping on a park bench as crimes, and instead considers them problems with unemployment, inequality, and a paucity of mental-health services, we can stop hailing the cops so much. We need to open up the possibility to react to wrongdoing, injury, difference, and culturally ingrained prejudice without merely seeking to punish or encage someone.

Abolitionists have a vision— a future in which vital needs like housing, education, and health care are met, allowing people to live safe and fulfilled lives—without the need for prisons. It’s not just about closing down prisons, but the whole complex. The practice of abolitionism is about addressing community tensions, understanding why people turn to the police, and trying to break the self-perpetuating cycle of violence and imprisonment, and the recognition that no human being is disposable.

Critical Resistance seeks to build an international movement to end the prison industrial complex (PIC) by challenging the belief that caging and controlling people makes us safe. We believe that basic necessities such as food, shelter, and freedom are what really make our communities secure. As such, our work is part of global struggles against inequality and powerlessness. The success of the movement requires that it reflect communities most affected by the PIC. Because we seek to abolish the PIC, we cannot support any work that extends its life or scope.

I hope you will help support Critical Resistance and their important work by making a small donation. Every donation helps in Imagining a New World

You can use the content below to communicate with your potential donors.

I am helping Critical Resistance reach their year-end fundraising goal of $45,000 to sustain their organizing for prison industrial complex abolition!

This is why I've created a fundraiser to support CR. Their work to abolish the PIC will strengthen community—and you can be a part of it.

Check out my fundraising page and please consider making a donation to help me reach my goal of [Your Fundraiser's Goal Will Automatically Go Here].

Giving online is easy and fast, and your support will make a real difference. I appreciate your help!

I just started a fundraiser for Critical Resistance! Help me reach my goal to chip away at the prison industrial complex! #AbolitionIsEssential

You can use the content below to communicate with your potential donors.

Thanks for supporting CR's organizing in 2022 and beyond!

Gifts from donors like you make it possible for CR to run campaigns and projects against the prison industrial complex and create a healthier, more liberated future. For your records, your donation is tax deductible to the extent allowed by law. CR's Federal Tax ID Number is 20-4412916.

We will continue to send you updates about our campaigns and projects, but should you want more information about our work or if you're interested in becoming more involved with Critical Resistance, please let me know. We are so appreciative of your support, and are excited to move boldly and strongly into 2023!

You're amazing--making a difference. Thanks to all who donated to my fundraiser so far!